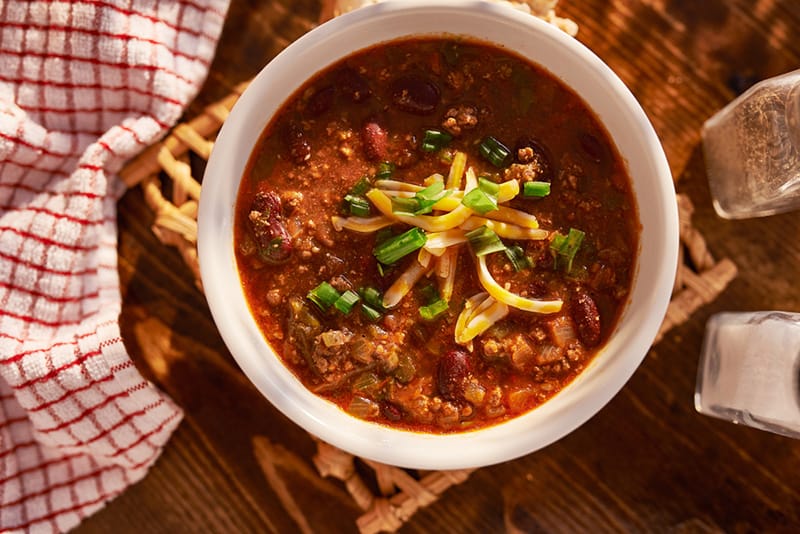 Don’t let the cold weather keep you indoors! If you’re getting a little bit of cabin fever and are looking for a chance to get out and see your friends and neighbors, make plans to attend the Golden Ladle Chili Cook-off on January 21. We’re excited to be hosting this event as an opportunity to get together with friends for the NFL playoffs, where multiple TVs will be showing the AFC and NFC championship games. And what goes better with football than a big bowl of hot chili? The quintessential tailgating food is not only fun to make, it inspires quite a bit of competition among chili afficianados.

In the meantime, here are some chili fun facts to get you in the mood.

There is some debate on how chili became such a big part of our American culture. Some people say it’s a Mexican dish that Americans have adopted, but Mexico strongly denies chili. It might be that it’s just one of the first Tex Mex dishes created — a truly American food with some spicy heritage. The first written description of chili came from Houstonian J.C. Clopper in 1828, after visiting people in San Antonio. He basically described it as a hash with peppers, and a way for people to stretch a little bit of meat into a full meal.

Since then, the popularity of this warm, filling, yet somewhat cheap-to-make meal has spread beyond Texas. It grew to great popularity throughout the country during the Great Depression, thanks to chili parlors where the food was cheap and the crackers were free.

Today, there are hundreds of different chili recipes populating the internet, and debate raging over whether true chili contains beans or not (if it’s Texan chili, it does not). But no matter how you make your chili, the main ingredients remain constant: a meat of some sort, combined with onions and peppers and simmered to perfection.

If you want a chili that will knock the socks off your taste testers, follow these tried and true steps:

High Meadows Golf & Country Club might pride itself on its year-round, world-class golf course, but we’re also proud of the community atmosphere within our neighborhood. It’s events like our Golden Ladle Chili Cookoff that help bring the community together and build lasting friendships. Make plans now to attend, and bring an entry for the contest or just bring your taste buds ready for action!

Winter’s Fashion Trends in the Spotlight at High Meadows
Hollywood’s Take on Golf: Movies to Get You Through the Winter