One of the unique things about High Meadows Golf & Country Club is its strong support of ladies golf. Rather than being relegated to a few unsavory times on the course, ladies get the same treatment as men here at our club. Two days a week, Thursday and Saturday, are ladies play days, but you’ll find women out on the course other times as well. Competitive golf opportunities are also abundant for women, with many LGA tournaments scheduled throughout the year, as well as men’s and women’s brackets during other tournaments. 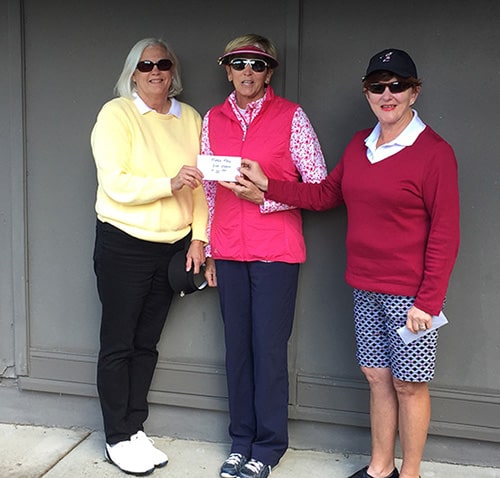 This past summer, the LGA at High Meadows Golf & Country Club started something new, the Match Play Ladder, suggested by member Dian Ramey, who had participated in a similar tournament at a different club. “The idea is similar to the NCAA basketball tournament, you start out with a bracket with all of the teams, and as the summer goes along each team is paired up to play with another, until eventually you reach the championship round,” said Cathy Williams, member and Match Play Ladder chairperson. This year’s tournament started out with 11 teams totaling 22 participants, and play started on May 13. During each round, participants had about a week where they were required to set up a golf game with the opposing team, which lent a little flexibility to the tournament.

“Everyone who participated had a lot of fun with this,” Cathy said. “It gave people the opportunity to play with people they normally wouldn’t play with, which helps members get to know each other. It also allowed participants the chance to see different styles of play and work to improve their skills and try new strategies to win. Most matches were very competitive, going up to the 16th or 17th hole tied up.” 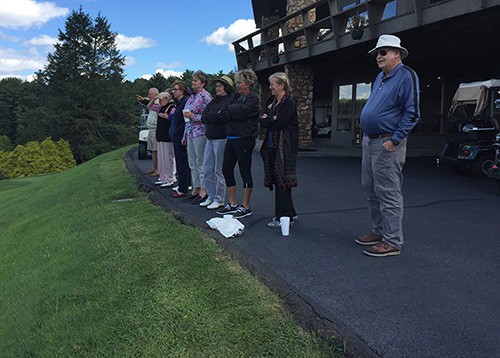 Cheering on the ladies!

Cathy entered the tournament with Vicki Cox, and together they made it through to the second round. “When we got to the third hole and were already down by three, we knew we had to figure out a new strategy to stay competitive,” Cathy said. “We really focused on our strokes and placement, and were able to tie it up until the 16th hole.”

Cathy and Vicki can find a little solace in the fact that they lost to the eventual winners of the tournament, Lisa Bishop and Mimi Boyle.

This year’s tournament was such a success that Cathy hopes to see it grow even bigger next summer. “We hope to have at least 40 participants next year, and see even more of our members take part in this unique opportunity,” Cathy said. “It’s such a great way to compete, with the built-in flexibility and matching up of teams.”

Look for the sign-up for next year’s tournament in early spring. And until then, take advantage of the opportunities for ladies golf at High Meadows Golf & Country Club, whether through other tournaments or just a fun round of golf on ladies’ day.