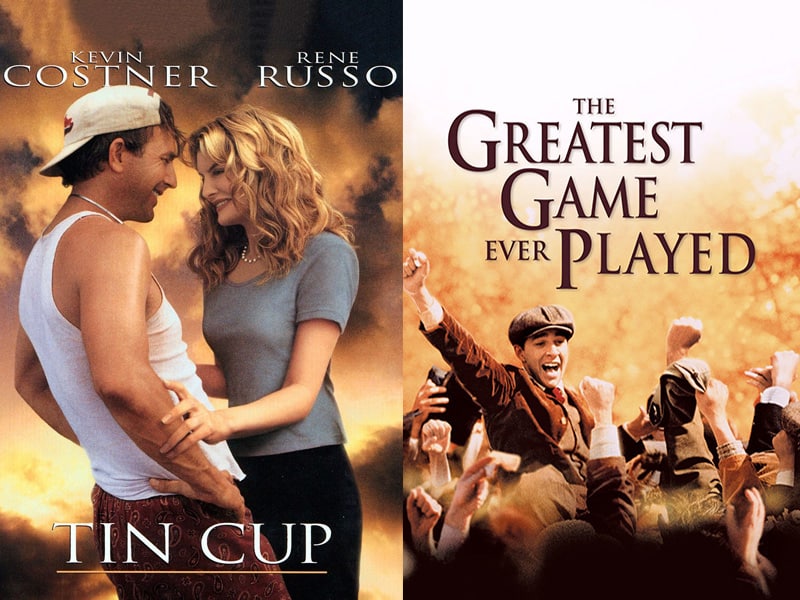 Here in the mountains of North Carolina, we’re blessed to have a winter season that includes some days when the bright sun warms up the Earth just enough to make playing a round of golf enjoyable. But there are still plenty of days where the temperatures don’t climb above the freezing mark and bitter wind makes being outside for extended periods of time uncomfortable, to say the least. Luckily, there’s still a way to get your golf fix in on those days when the ground is frozen solid. Pop in a DVD and watch some of your favorite movie stars play a few rounds of golf, along with a few laughs or a little drama to pass the time.

We asked the High Meadows golf team for some of their favorite picks, and rounded up a few others as well. It’s a great way to find inspiration for your golf game, watching the underdog come back from behind!

Mike West: Tin Cup. (1996)
Kevin Costner brings an aloof classiness to the world of golf in this movie that takes the life of a washed-up golf pro and brings him back into the competitive circle in order to win over the heart of a woman. In true sports movie fashion, you’ll be rooting for the underdog to win both on the links and in love. As an added bonus, the film takes place at a fictional U.S. Open tournament set in North Carolina, even though it was actually filmed in Texas and Arizona.

Todd Hutcherson and Tim Brant: The Greatest Game Ever Played. (2005)
Golf has long had a reputation of being a game played by the wealthy, due to its clubs and equipment. But in 1913, an amateur golfer, won the U.S. Open and began to change things. This movie is about that exciting run by Francis Ouimet, a caddy who came from an immigrant family and had big dreams of playing as a pro. He missed the qualifying and returned to work in his father’s sporting goods shop, only to enter the U.S. Open when it was held near his hometown, winning the trophy and changing his dad’s heart.

Caddyshack. (1980)
Quite possibly the classic golf film, there’s no denying that Chevy Chase, Bill Murray, and Rodney Dangerfield brought new life into an old game with this comedy that came out in 1980 and still has fans laughing today. The plot follows a caddy dealing with a brash new member stirring things up at the club, as well as a side story of a gopher infestation that highlights Bill Murray’s slapstick humor. While reviews tell it like it is, that this slapstick comedy is crude and juvenile, the story resonates with many golfers and the quotable lines have garnered the movie a cult following, making it still hugely popular more than 35 years after its release.

The Legend of Bagger Vance. (2000)
Robert Redford brings his movie magic to the game of golf as the director of this movie starring Will Smith and Matt Damon. For any golfer who’s had a slump, this movie is inspiring with its somewhat mystical caddy that comes along and brings the life back into a local golfer’s game, helping him win a tournament against some of the best golfers of the time as well as winning back is dignity and the love of his life.

Goldfinger. (1964)
Technically not a golf movie, this third movie in the James Bond series (back when Sean Connery was still playing 007), has what some call one of the greatest golf scenes on film. When Bond learns that Goldfinger is one of the richest men in the world, he sets up a high stakes golf game and ends up winning, even though Goldfinger is found to be cheating. Thanks to Ian Fleming’s own love of the game, the details and accuracy are what make this golf game shine.