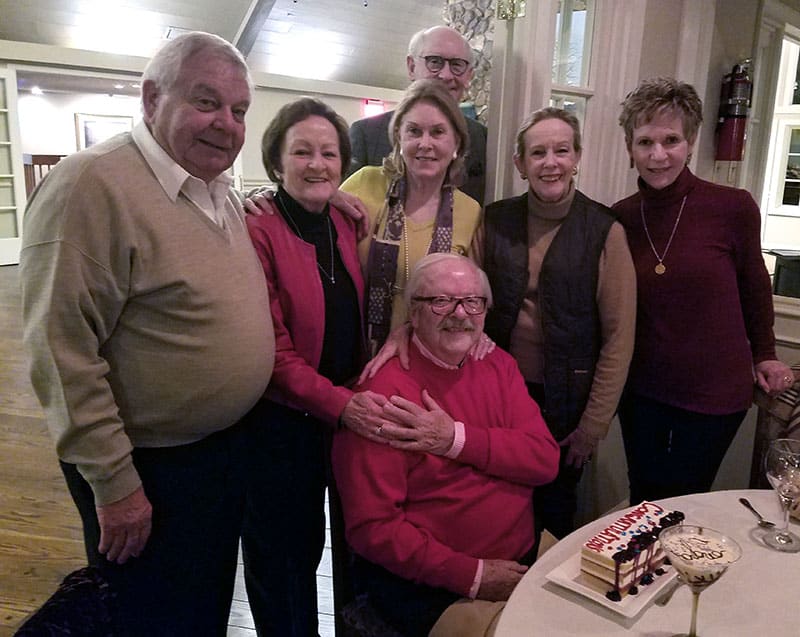 This winter, there was cause for celebration at High Meadows Golf & Country Club as two of our members recently achieved status as newly minted United States Citizens. Both Paul Demmink and Barry Ward have lived in America for many years, working and raising families. But both held citizenship in other countries. It was a coincidence of sorts that they both received their citizenship this winter, and we are proud to honor their stories here, sharing the great news with all of the High Meadows Community.

For Paul, the choice to live in America was his parents. They brought 15-month-old Paul to the United States in order to chase the American dream. His father, who was a traffic cop in Holland, was able to get a job selling textile machinery in the United States. That job took them all over, and Paul lived in Boston, Puerto Rico, Sanford, NC, and then Gastonia, NC. Paul chose a career that didn’t involve as much moving around. After graduating from college and getting his CPA license, he first worked at Price Waterhouse in Winston-Salem, and then took a job with a software company in Charlotte. Today Paul is the president of NAPCO in Sparta.

Paul, his wife, and his two daughter have had a home at High Meadows since 1994, but moved up here full time in 2006, when his daughter attended Alleghany High School.

Barry road to America was a little different. As a young man, he worked with his father who was a golf professional at Stoke Poges, a well-known golf course in Buckinghamshire, near London. At the time, every young man served in the military for two years, so he left the work with his father and joined the Royal Air Force. Once he was out of the military, he decided to try to make a go of golf for himself, and came to the United States to be the teaching golf professional at East Lake Club in Atlanta, GA. After a few years there and then at Ainsley Park, he took a job as a sports marketing manager for British Airways. That job took him all over the world, but eventually he settled in Charlotte and started his own travel company.

Barry and his wife have two children, Richard and Maggie. They bought a house at High Meadows about 25 years ago, and have been here off and on ever since, living her full-time now.

The Oath of Citizenship

Both Paul and Barry decided that after years of living and working in the United States, it was time to go for citizenship, something that was a big decision for both. “When I was in the Royal Air Force, I had the honor of being on the parade route for the coronation of Queen Elizabeth in 1953,” Barry says. “When I saw her come by in the carriage with her crown on, it really made an impression on me, and I made a vow to the Queen that day, ‘so long as you’re Queen I will be British.’” Barry stayed true to his vow, but after years of his grandchildren asking him why he was still British, he decided that the Queen was now 93 years old and it was time for him to break his vow.

The process to citizenship takes months, and involves working with the Department of Homeland Security, getting fingerprinted, and taking a test. “When you’re interviewed they will ask you 10 questions and you have to get at least 6 right,” Paul says. “The questions consist of things like how many representatives are in the House of Representatives, and why do we celebrate the Fourth of July.” A lot of times people dread having to work with government agencies. Anyone who has waited for hours to get a driver’s license renewed knows that the process can be tedious. But Paul says it all went very smoothly. “Everyone I worked with through the DHS was very nice and helpful. If they didn’t know the answer to my questions they got the answer and got back to me right away.”

Once the process is complete, there is a ceremony to mark the citizenship. For Paul’s ceremony there were 82 people from 40 countries, and at Barry’s there were 80 people from 37 different countries. “I didn’t expect it to be much of a deal, but the day of the ceremony it really meant more to me than I thought it would,” Paul says.

For Barry, becoming a citizen was a way to honor the country he chose to be his home. “This country has given me so much, I’ve been so blessed to live here,” he says. “The least I can do is be an American.”

The next step after citizenship? For both men, registering to vote takes top priority.