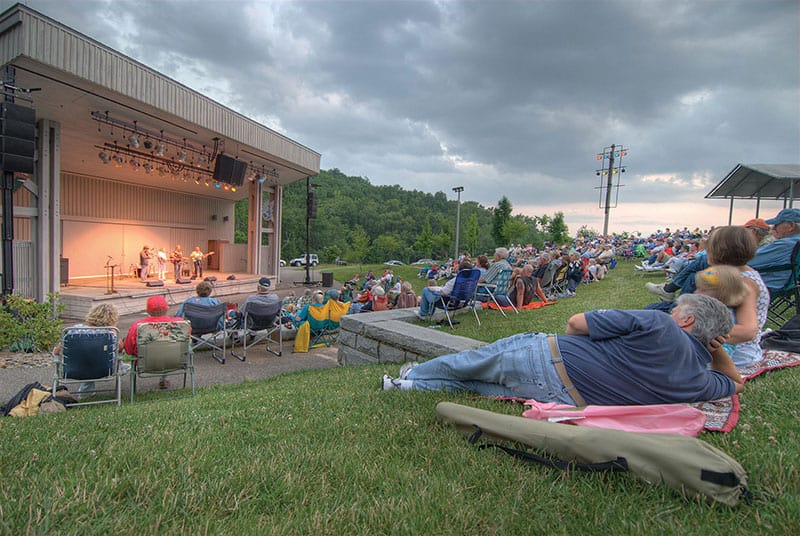 It’s obvious that music is an important part of the culture in the area surrounding High Meadows Golf & Country Club. The local musicians that play during the different music series and festivals in Sparta and the musicians that congregate in Galax during the Old Fiddlers’ Convention are evidence of how much a part of our local culture music is. Drive up the Blue Ridge Parkway just a little ways, and you can experience the roots of all this music in both an interactive museum and lots of live music at the Blue Ridge Music Center.

The Blue Ridge Music Center was established in 1997 by the United States Congress with support from The National Council for the Traditional Arts. Today it is operated by the National Park Service in partnership with the Blue Ridge Parkway Foundation.

The backbone of the center is the interactive museum. Open from 10 a.m.-5 p.m. Thursday through Monday May 4-24 and daily after May 24, as well as during concerts, the museum is a highly educational place to learn about the history of traditional music Alleghany and five surrounding counties. Rich in culture and tradition, the music of our area has played a big influence in all types of music we listen to today.

The museum has displays of different instruments and other artifacts. You’ll see many variations of fiddles that were created and used to make music in this area. The fiddles themselves were a combination of the African-American bango and the traditional European fiddle. In addition to the traditional museum displays, there are several interactive exhibits at the museum. Try your hand at a mix and match game of song lyrics, hear personal stories from people in the area, and try your hand at mixing your own versions of songs.

The museum itself is only a small part of the overall experience you’ll find at the Blue Ridge Music Center. Live music is an important part of the center’s offerings during the summer. Every day the music center is open there are pick-up jam sessions in the breezeway from 12-4 p.m. Check out the website for the list of specific performers each day.

There are also concerts most Saturdays during the summer featuring a wide variety of performers. You can hear the Steep Canyon Rangers, the Kruger Brothers, Sierra Hall and Shadowgrass, and The Barefoot Movement, among others, during the Summer Concert Series.

Plan to spend the day at the center, soaking up the culture and enjoying the music. In between the mid-day music and the night-time concert, take a hike on one of the two trails around the center. It makes for a great day trip from High Meadows, and a fun place to enjoy with your friends.